Despite your best efforts, some of your subscribers will eventually become disengaged. And, now that the unsubscribe took place in Informz, you may be wondering how this gets back to iMIS. Let's take a look at the iMIS Unsubscribe Writeback (iUnsub in iMIS).

What is an Unsubscribe?

Users who unsubscribe don't want to receive ANY additional mailings. As a result of this, the iUnsub writeback is created and sent to iMIS. The subscriber can unsubscribe in a variety of ways:

Any of these actions result in the subscriber being unsubscribed within Informz.

When an unsubscribe occurs via an Landing Page, Informz the subscriber's email address as well as the subscriber's radio button (reason) selection and any information that was entered in the form's text area (where subscribers can explain their reasons for leaving).

EXAMPLE: If a subscriber selects "I receive too many emails" and enters "I'd prefer a weekly email rather than daily ones," in the text field, both messages get written back to iMIS. 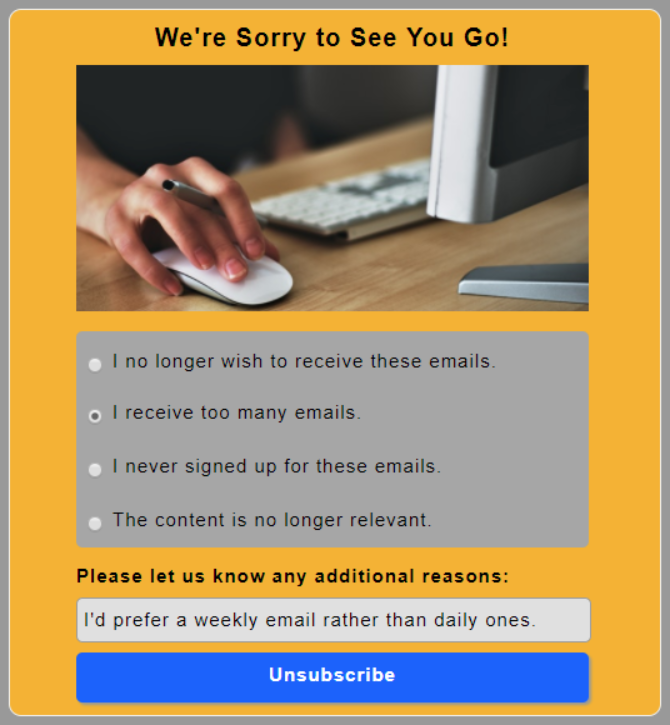 The iUnsub writeback occurs after meeting the following three conditions:

Informz is always the master database for unsubscribe data. Data written back to iMIS includes timestamp information, which appends the changes table after a sync with Informz. The iUnsub writeback record is located in the iMIS activity table. iUnsubs write back once daily at 1:00 am (Eastern Time).