NOTE: Character set selection is an optional feature that is not enabled by default. To have it enabled in your account, create a case.

The character set that you choose will manage how lists are uploaded and how messages are created. So before choosing a default character set, you should understand the distinction.

NOTE: Custom Fields cannot interpret some of the characters in the International Characters set. Consider using Enhanced Fields instead.

To choose a default character set: 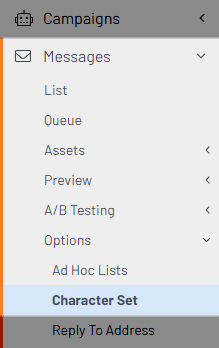 The page refreshes and a confirmation message displays at the top of the page.

NOTE: This option can be disabled so that admins are unable to choose a character set for the upload and the default character set is automatically used.

To have this option disabled, create a case with our Customer Support team.

As shown above, there are a few character-set options available when uploading a list of contacts into your Thrive Marketing Enterprise account. These are described below and matched to the option on the Character Set page.