This feature lets Admins configure messages so that they get sent to recipients when the recipients are most likely to open the message. Higher Logic queries historical "open" metrics in order to determine when recipients typically open email messages, and then sends messages as close as possible to that typical-open time in order to increase the likelihood of the message being at the top of their inbox and being opened.

NOTE: Send Time Optimization is available in all accounts, but it is not enabled by default. To have it enabled in your account, create a case.

Set optimization for a message

When this feature is enabled, the Send on multiple schedules check box displays on a message's Send Message To Group page.

When the box is checked, two radio buttons display. 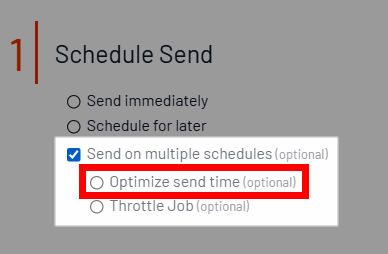 The system will use the logic described in Send Time Optimization process, below, to determine what time to send the message to each recipient based on when they have historically opened messages.

To better understand how open histories are calculated and optimization applied, consider the following two scenarios.

Send Time Optimization merely considers the historic send times and open times. It uses these to calculate, per recipient, the optimal time to send messages. The goal is to get as close as possible to when recipients are most likely to open messages. If that optimal time cannot be determined, the system will send message at the first scheduled send time.

The behind-the-scenes logic of how this feature works is described in the sections below.

Throttle Job is an optional setting that aids in optimization. It lets you set a number of hours over which to send a message to sub-groups of a large group of recipients, instead of sending the message to all recipients simultaneously.

EXAMPLE: You are sending a message to 500,000 recipients. 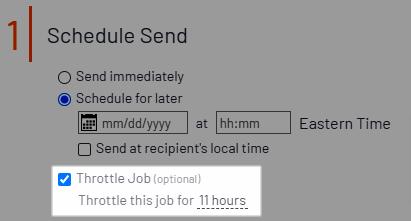 Check the Throttle Job box and set 11 hours. The system will send the message to 100,000 recipients per hour over the 11 hours.

NOTE: Throttle Job is not enabled by default. Discuss with your Customer Success Manager whether it will accommodate your deliverability needs.

Higher Logic requests that you notify us prior to sending out extremely large deployments.

If Send Time Optimization is enabled for a message, the system follows the process that is detailed in this section.

NOTE: If there are recipients who have never been sent a message (i.e., have no "open history"), the message will be sent to them at the first scheduled time.

IMPORTANT: The system also considers a Days To Look At setting, which is set, as needed, per account, by Higher Logic. Discuss with your Customer Success Manager and/or the Higher Logic Deliverability team to determine the ideal "number of days" setting for your deliverability needs.

Any recipient who has opened a message in the past <Days To Look At> days will be sent the message based on:

If a recipient has opened multiple messages at different times during the day, the system will consider the combination of two factors: the earliest time of day that has the most number of opens.

EXAMPLE:
If the message was scheduled to send at 8:45am and recipient John opens his email messages at:

If a recipient has a send history but no recorded opens, the message will be staggered over the scheduled period starting at the scheduled time.

Any recipient who has been sent a message in the past <Days To Look At> days BUT who has not opened a message during that time, then the message will be sent:

Whom to send to and when

Which recipients will be sent the message and when is decided at the start of the send job (at 1st hour) for all hours.

If there are 100 recipients in the receiving group and messages are sending at 10 per hour, this data is stored. This means that the calculation is performed once, at the start of the job for the full job, not each hour as the job is running.