When you set up a campaign, you configure a series of messages that will be sent to the campaign members (whom you also select).

You can also set send intervals between when the messages are sent so that the campaign members have sufficient time to receive, read, and act on any one message. This eliminates the need to personally monitor when follow-up messages should be sent and to whom; the system does it automatically.

NOTE: The send interval can be set in days, hours, and minutes.

EXAMPLE: Assume your campaign's "call to action" (its goal) is registering for a webinar via a link in a message, and that the campaign's members are the contacts belonging to the group that you selected in the Select Campaign Members section of the setup page.

In the Select Messages and Send Interval section, you specify 3 as the number of messages to send and you select the three messages. Then you set the length of time to wait before sending each of the messages; these are the send intervals.

It's easy to see how using the send interval feature makes campaign management much easier.

The example above is a good overview of the process. In this section, we'll take a closer look at the options and walk through setting up several send intervals.

Send intervals are set in the Select Messages and Send Interval section of the campaign setup page.

icon next to the section title to open a dialog with helpful information. 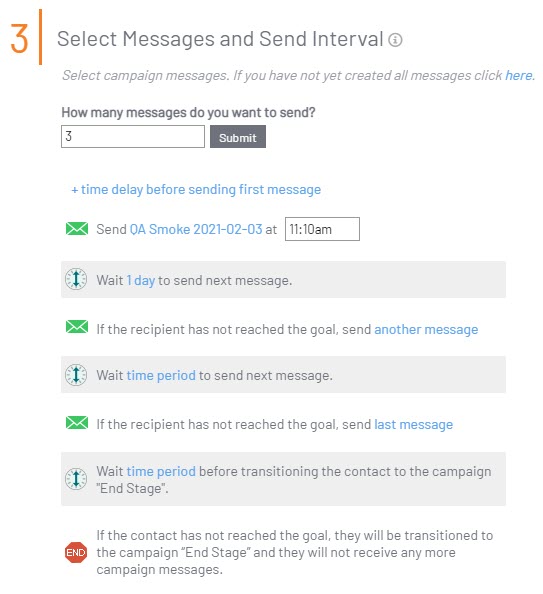 NOTE: There is also a "wait interval," after which, any campaign members who have not reached the goal will be automatically transitioned to the End Stage of the campaign, as described below.

In addition to intervals between when messages get sent, you can set a "wait interval" between when contacts receive the last campaign message and when they are automatically moved to the end of the campaign. Think of this as a "grace period."

NOTE: This is applicable only to contacts who do not reach the goal by the end of the campaign. Contacts who have reached the goal are transitioned to the End Stage when they do so.

If the last message has been sent, contacts then have <length_of_grace_period> (which you set) to reach the campaign goal (e.g., register for the webinar).

NOTE: No matter when in the campaign contacts reach the defined goal, they will be moved to this stage upon reaching the goal.