NOTE: This article is for customers with the New Admin Experience interface (vertical left-navigation bar). 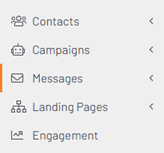 If your interface is different, view the "classic" version of this article.

There are three high-level categories of campaigns, each of which has a distinct purpose.

NOTE: This article describes the pre-built campaign types that are available as Engagement Campaigns so that you can more quickly determine which is the best option for your campaign objective.

NOTE: The campaigns that are described in this article are available only as Engagement Campaigns. They are not available from the Campaigns page.

TIP: Even though pre-built campaigns have much of the campaign process and steps preset for you, it's a good idea to understand the individual elements that comprise a campaign. A breakdown of each campaign element is provided on the Workflow Builder page.

Before you start creating a campaign, it's important to consider the objective of your campaign. Then you should use this article to review the intent of each campaign type.

TIP: Consider: Each campaign is not only pre-built, it's purpose-built.

So it's a good idea to understand a campaign's purpose so that you can choose the best option, based on your objective.

PURPOSE: Use to automatically place your recipients into Engaged and Disengaged groups.

Engagement campaigns make it easier to automatically recognize those who have not recently interacted meaningfully with your organization. This can trigger campaign messages that encourage these people to re-engage. You can tailor these messages to match the interests of each recipient.

Interaction Based on Date Range

For this campaign, engaged is defined by having interacted with at least X messages that were sent during the specified time period. For example, "at least three messages within the past two months."

You can set up Engaged and Disengaged groups and the campaign will automatically add/remove recipients to/from the groups based on their interactions.

Having these groups makes it easier to identify which recipients are more likely to engage with your messages, so you can target your content to them.

Use the Filter Out Group option upon send to select the target groups and then filter out one or more groups. When the message is sent, it automatically removes those in the filter-out group.

PURPOSE: Use to assign points (or scores) to recipients based on their interaction with your content.

Lead Scoring campaigns give you the ability to automatically award points to recipients when they perform an action, such as those listed below, which can be used to configure Segmentation rules.

Additionally, you can configure Score Thresholds whereby, when a recipient accumulates a certain number of points they can be added to a group, given a tag, or even added to another campaign. You can also have an internal notification sent with the recipient's information.

PURPOSE: Use to encourage re-engagement among disengaged recipients.

For this campaign, re-engagement is defined as a recipient either opening a message or clicking a link.

TIP: If you don't already have a Disengaged group of recipients, use the Engagement campaign (discussed above) to automatically identify disengaged recipients.

In this campaign, you set:

PURPOSE: Use to segment recipients into different groups based on their interactions with your content.

Segmenting your recipients enables you to more easily create targeted campaigns so that you can, for example, focus "re-engagement" type messages to those who have not been meaningfully interacting with your organization.

This "simple" campaign requires little configuration. You can set up Segmentation rules using the interactions listed below.

Any recipient who takes any one of the following actions is automatically added to the designated group for the action.

This "advanced" campaign gives you more control over the conditions of the required action. You can set up Segmentation rules that are more "granular" using the interactions listed below.

Any recipient who takes any one of the following actions is automatically added to the designated group for the action.

NOTE: In the following actions, X represents the "number of" value that has been configured.

You can use suppression to avoid sending messages to inactive and outdated email addresses, which will improve your deliverability and sender reputation. This campaign lets you choose either recipient inactivity or recurring bounces as the trigger for automatic suppression, so that you can be sure that the recipients in your database have valid email addresses.

Suppressed recipients will no longer be sent any email messages from your account.

Now that you have a better understanding of the various Engagement Campaign Types that are available, get started creating your campaigns.