The Campaign Designer's use of steps makes building a campaign a quick and intuitive task. Each campaign step determines which emails are triggered to go out to a subscriber, when they are triggered, and when to check to see if the subscriber has taken the appropriate actions to be moved on to the next step.

On the Marketing Automation > Campaigns > Create page, you can begin the campaign-creation process. The grid-lined area is called the Canvas, while the left-hand side displays the steps for the campaign. To build a campaign, simply drag-and-drop each step of the campaign onto the canvas.

The power of an organized, clearly understood, and methodical campaign cannot be underestimated. These steps are the building blocks you use to automate your communications campaigns. Get creative, and don't be afraid to try something new or innovative!

Each step you can add to build your campaigns is listed and described below.

Connecting two steps is accomplished by clicking the arrow from the first step (that is pointing to the next step) and dragging your mouse to the arrow of the next step.

Keep in mind that Decide steps require you to make more than one connection, so that the campaign flow may continue no matter how the subscribers interacts with that step. As you can see in the example below, users can decide one of two options, and no matter which option they choose, additional steps are available for each path. 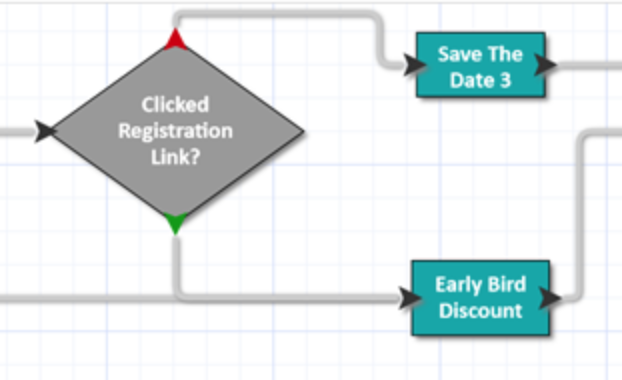 You can change the path between steps at any time by deleting their connection. To do so:

Make sure that you reconnect those steps so that the campaign can ultimately be activated and put into use. If there are missing connectors between steps, the campaign will have errors that need to be addressed prior to activation.